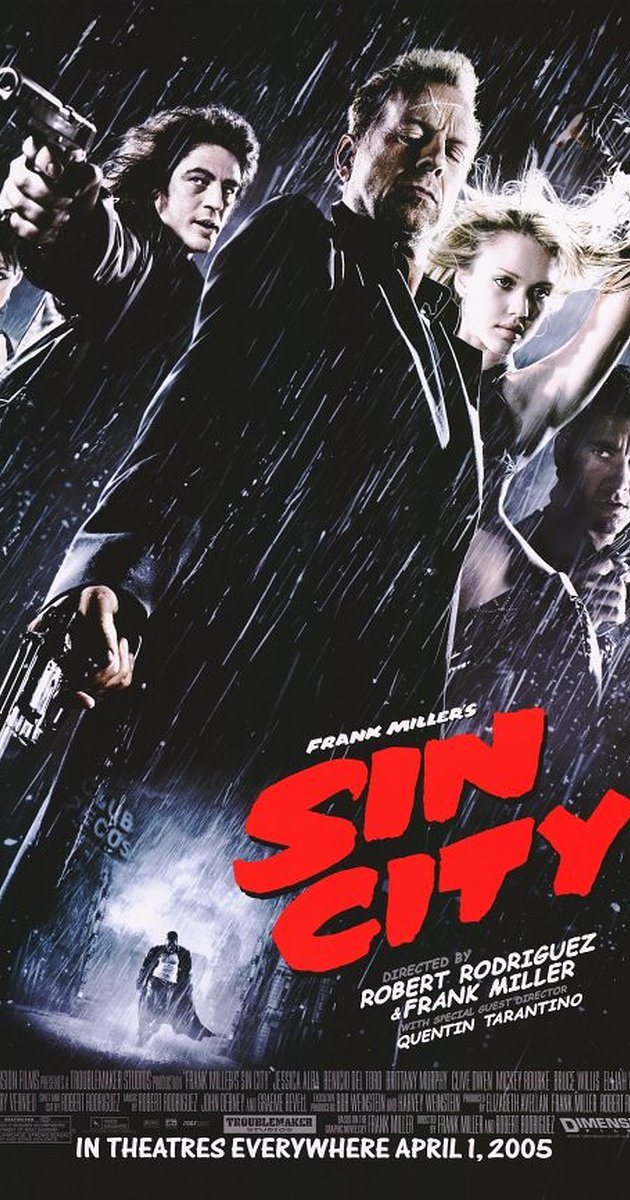 Sin City tells a few stories about a place called Basin City. The stories explore the corruption that has a hold the city.

I haven’t read the comics but from what I’ve read on the internet, the movie is a very good adaptation. The reason for that is probably because the guy that wrote the comics, Frank Miller, was one of the directors on the movie. It felt a lot like the game Max Payne. I don’t know if the game was based on the books, but that’s the vibe I was getting while watching. Sin City looks incredible. It was super stylized but I was very much into it. The way the whole movie was black and white with only certain (typically plot related) things having color on occasion was beautiful to me. Somehow, these guys made a black and white movie look amazing. The VFX wasn’t bad at all. Most of the time, these effects made the movie feel more comic-like by giving things like driving scenes more life. I liked that it told a few different stories and they stood on their own with little pieces in them that connected all the stories. Overall, very good movie.

I’m going to talk about the movie in each of its parts.

I was really into this story. The betrayal from Hartigan’s partner really drew me in. It showed you how corrupt Basin City was almost immediately. It also really set up the idea that you’d never know which cops were corrupt, which Dwight ends up dealing with in his story.

Hartigan and Nancy’s romance was a little weird, let’s be real. Hartigan was almost 60 when he got locked up so he had to have been at least 60 after he got out of prison and he was in love with a 19 year old that he described as the daughter he never had.

When Roark Jr. was in his Yellow Bastard form it really appealed to me. You didn’t know what he was at first, he looked like a monster and, in reality, he was. That Yellow Bastard diddled children and had his father cover for him, he was a coward.

Hartigan ripping Junior’s “equipment” off with his bare hands was pretty impressive, just thought I’d throw that in here.

I think I liked this story the most because of how bad ass Marv was. Dude was getting shot and beaten to a pulp like it was nothing.

The shot of Blondie in the red bed while everything else was black and white was very appealing. It kind of fits in with my love for the style of this movie, but this shot really exemplified it well for me.

Frodo was great as Kevin even though he didn’t speak a word. It worked well for a creepy cannibal prostitute killer. The look on his face as Marv chopped him up and fed him to the wolf was truly unnerving.

Marv surviving the electric chair on the first try was great. He was a really tough guy and the fact that he survived the first zap and taunted the police was perfect.

I’ve been sitting here for a few minutes now and can really only think of how awesome the prostitutes of Old Town were. A bunch of gun wielding ladies keeping themselves protected from the crooked cops and mob? Rad.

-The Customer is Always Right-

I saved this for last because it really only ties into The Big Fat Kill. I really just liked that it shows you that Becky didn’t get away from her betrayal.