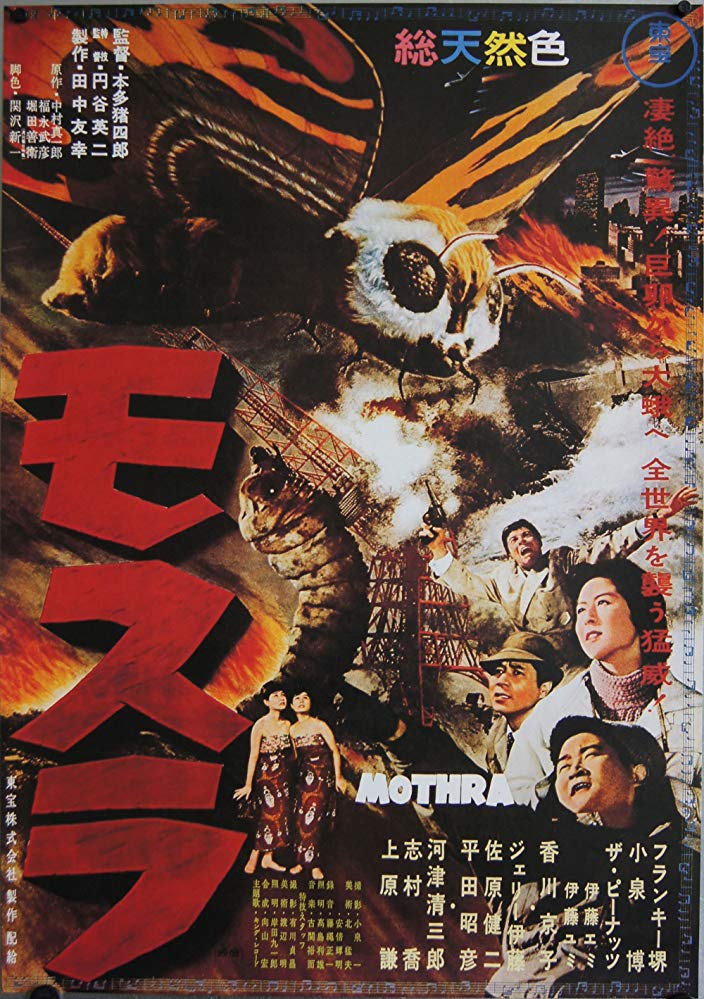 Mothra is about a giant moth creature attacking Japan in order to rescue two fairies that were abducted from the island Mothra protects. A reporter has to do his best to help the fairies get to Mothra to limit the destruction caused by the monster.

Now, I was going to try to avoid comparing Mothra to Godzilla but it was difficult since I watched them as a double feature so I will get the comparisons out of the way immediately. I believe Mothra is a superior film to Godzilla in the areas of special effects and story. However, I feel Godzilla has the better ending. Mothra uses miniature city models in quite a few parts of the film and they were very hit or miss. Some models looked great and it was hard to tell if it was actually real or not and others looked like I built a city in my bedroom and punched at the buildings with a sock puppet. I was a big fan of the story they put forward in this film. It was very easy to follow. Mothra isn’t a huge part of the movie, as it focuses mainly on the interactions of the people trying to prevent the monster from showing up. Overall, the story was solid but it wasn’t exactly what I was expecting from a Kaiju film.

The first thing we have in the movie is another ship going down in a radioactive area. How much of this damn country is effected by radiation? I’m surprised everyone in these movies aren’t looking like extras in a Cronenberg story.

I liked Infant Island a lot. The look of it was stunning for 1961 and it gave me vibes of something out of Star Trek mixed with a little bit of Krakoa from the X-Men. I was a little upset that the actual natives of Infant Island were not tribal infants though.

Everything about the fairies’ songs were great. It all sounded very interesting or pretty, depending on what they were doing. The Mothra song they sing even got stuck in my head for a little bit. A personal favorite of mine from this film was when the fairies were singing in the city and the filmmakers used the song as a transition to the Infant Island natives awakening Mothra. It might have been the most well executed minor detail in this whole film.

Mothra being a larva at first was kind of shocking to me. She was ugly as hell but somehow also the least terrifying monster I’ve ever seen. She had to take the time to swim all the way to Japan and everything about it was almost funny. Having your city be destroyed by a giant larva has to be the most insulting thing ever. At least send in something menacing to destroy things. This being said, when Mothra becomes the moth form she was even less scary. A giant butterfly of the night is just as bad as a glorified worm. Granted, Mothra wasn’t there to actually destroy things, she was just on a rescue mission and everything was collateral damage.

The whole cocoon thing was strange to me as well. The fact that they just let her make a cocoon without continuing the attack was baffling. At first I thought they were just gonna leave Mothra alone in the cocoon so at least I got to see a giant heat ray fired at her. They took that peanut of a cocoon and roasted it and Mothra still didn’t attack which kinda makes her a lame kaiju monster in my eyes. I really wanted some more destruction.

The ending really didn’t do anything for me. The whole symbol and song thing was pretty lame. I suppose it was the best you could get without killing Mothra which also isn’t what I wanted but it just seemed like there was a lack of urgency in their plan. Everything came together so easily for their idea to succeed and it was a very anticlimactic way to round out what they set up with all the ominous warnings that Mothra was on her way in the middle of the movie.